Taylor's Park | Out Day Out

Hello beautiful's! If you follow my instgram when you may already know how much I love Taylor's Park but I thought I would do a blog post and let you all know how much I love this place already and why you (if about the North West area) really should make the trip to visit and have an afternoon or evening out in this park.

Phil and me have drove past this park so many times and never stopped to go in but a months weeks back we have a free evening and it was a beautiful sunny day so we took a little trip there to have a check out of it. Since then we have been back to visit this place so many times - it's just so beautiful, clean and relaxing. Warning: This is a massive blog post as I wanted to explain the park in such great details. 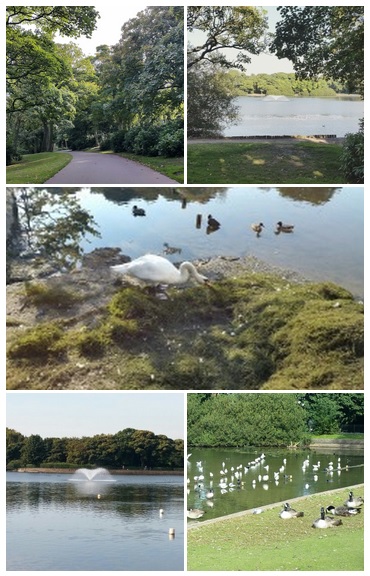 Taylor Park in St.Helens is the largest of the towns Victorian Parks. Opened to the public on the 18th of May 1893, it is Grade 2 listed on the Register of Historic Parks and Gardens. Taylor Park is approximately 52 and a half acres in size and originally formed part of the Eccleston Hall Estate. The Park is named after the family name of the man who donated the land to St.Helens, the owner of Eccleston Hall estate, Samuel Taylor VIII.

The land donated for Taylor Park included three areas of water created from dams. The largest is the big dam, which is the one most visitors will see, as it is in the centre of the park and has the boathouse and St Helens Ranger station on its banks. St Helens council were also granted fishing and boating rights to the big dam dam. There are two smaller dams on the Eccleston (Northern) side of the park, called the leg O'mutton Dam and the little dam called the Paddock. You pass these two dams if you use the car park entrance from the Eccleston Side of the Park.

The park has had major restoration and improvement work carried out with the aid of a nearly £1.2 million grant from the lottery heritage fund and has been awarded The Green Flag Award, which is the national standard for parks and green spaces in England and Wales. The St.Helens Ranger Service together with the Friends of Taylor Park organise an annual programme of events including an annual boat regatta that involves the resident model boating club, St.Helens model boat club.

Taylor Park is also reputed to have its own ghost. The ghost, known locally as the grey lady of Taylor Park, has been witnessed at night by a number of people on different occasions and is said to be the apparition of a very pale young girl, dressed in Victorian style clothes. The grey lady has only ever been seen at night and never caused anybody any harm, so don’t let her put you off visiting the park, enjoying the excellent facilities and watching the wildlife. 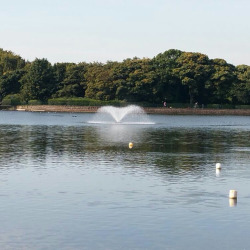 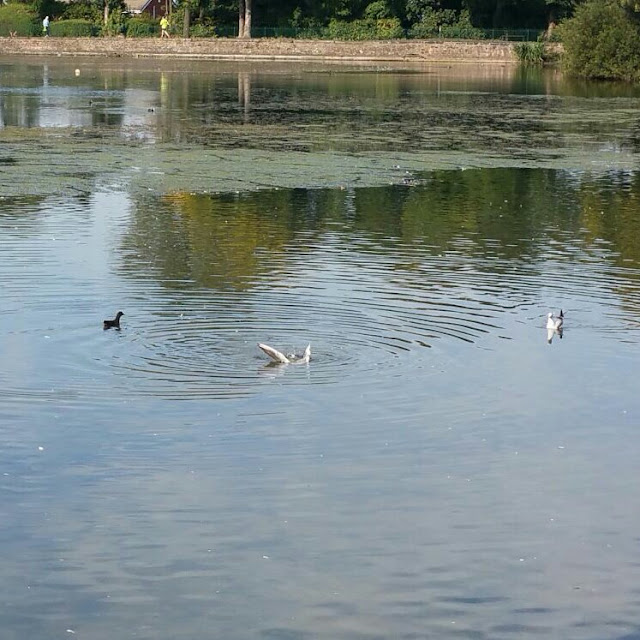 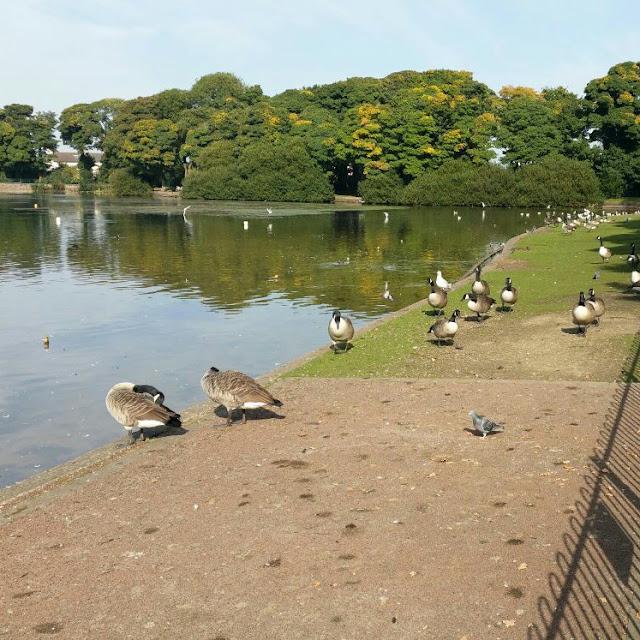 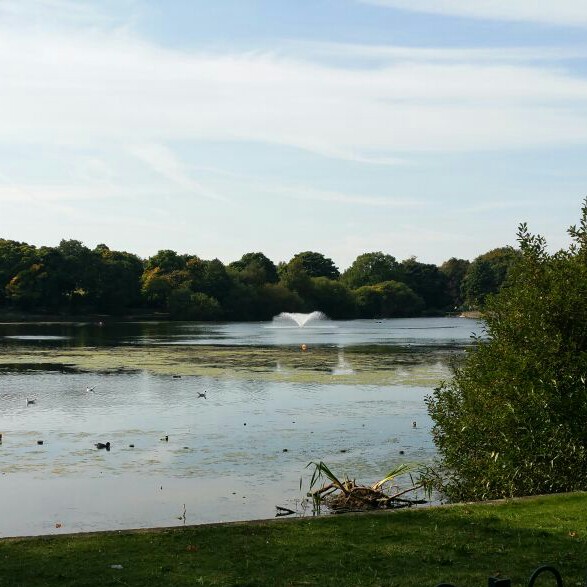 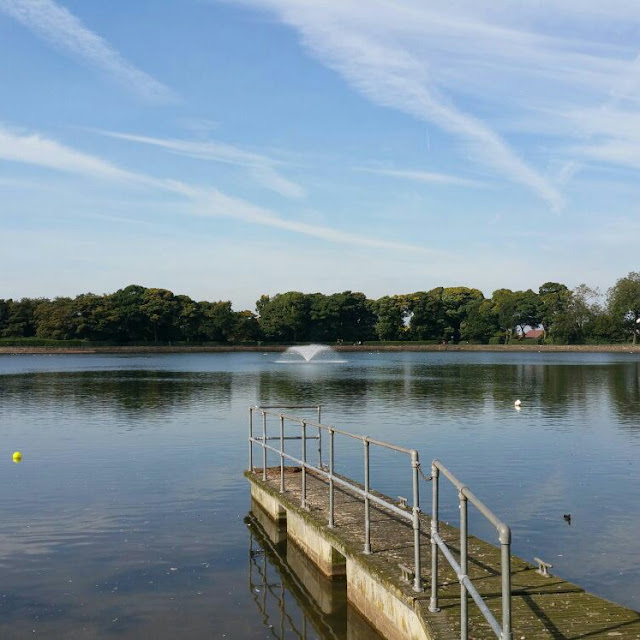 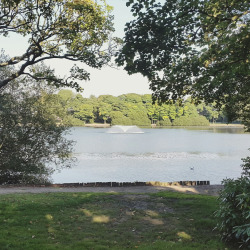 The Big Dam
The central feature of Taylor Park, this stretch of water is more open than others and attracts a large number of waterfowl and other birds. The water in the lake is kept oxygenated by a large fountain and, in the summer two additional fountains, any rubbish that finds its way into the lake is regularly removed by the parks rangers and this keeps the water fit for the wildlife, including some terrapins, as well as people using the lake for use in educational water sports such as kayaking and canoeing. St Helens model boat club meet at the lake on Sunday mornings and Wednesday afternoons and the lake is also an area where the public can fish with a local rod licence.

Children's Play areas
Taylor Park has two main children's play areas, one is a large fenced off area over by the opposite side of the lake from the boathouse. This area has a toddlers section and an activity section for the junior school ages, with wooden climbing apparatus themed as pirate boat and a castle, as well as swings, slides, etc. The second play area is at the bottom of the large hill in Taylor Park, past the Ranger station if you enter the park from the Prescot Road side. This area is not fenced and has a trampoline, climbing bars and a zip line. I would guess that this area is for any children up to young teenagers.

The Quarry Garden
A tranquil floral garden based inside the remains of an old sandstone quarry. The Quarry walls are occasionally utilised by St Helens Council’s Youth Service for teaching abseiling and rock climbing. Along the outside of the quarry, on one side is a path to the top of the leisure field, on the other side a flight of stone steps, also leading to the top of the hill, passes through another, smaller, rockery garden. On the right, as you enter the quarry, are a number of very old fallen trees used as a rootery. The rootery is to promote the growth of plants that prefer shade and damp conditions. The trees themselves are over 10000 years old and were found in local peat bogs.

The Ranger Station
St Helens Rangers are responsible for a wide range of activities in the Park and ensure the park remains in the high standard required to attract visitors from all over the North West. Not only do the rangers look after the plants, wildlife and park facilities, but they also arrange activities in the park and provide information both to the parks normal visitors as well as give talks to larger groups such as school children. One of the open days is taken by International award winning wildlife photographer, John Fairclough, who has been working in Taylor Park, with the Rangers, for over two years. The Photographic drop in days are held on the second Saturday of each month between 10:00am and 3:00pm. During these sessions, you can drop in and chat to John about getting the best use from your equipment, how to improve your technique, composition, digital manipulation and many other photographic subject.The Drop in days are free, but remember to bring your equipment and your photos with you.

Taylor Park Boathouse
Taylor Park Boathouse was built in the 1930’s, originally to house large wooden rowing boats which the public were allowed to hire. I am uncertain when the rowing boats had to stop, for health and safety reasons, but that what I have found it was in the early 1980’s. The Boathouse is now the base for outdoor activities organised by St.Helens Council Youth Services, and also houses a very nice little tea room cafe. Inside the cafe there are pictures of the old Taylor Park, including a picture of a motor boat, called the "Queen Mary", that used to take passenger around the lake.

The Skate Area
This area was once the site of a huge children's paddling pool, before health and safety concerns over broken glass in the water meant the paddling pool had to close. The area is now in two parts, a flat grassland area, used for general recreation and also for when the park holds shows such as dog shows. The other half of the area is a concreted area that gets used by children on skateboards and bikes. The skate area is on the opposite side of a slight embankment, from the boathouse, and opposite the ranger station.

Oak Wood Nature Area
Taylor Park is popular amongst bird watchers, with a variety of birds, both native and migratory. Jays, robins, blue and great tits, woodpecker, finches, kingfisher a great variety of waterfowl are just a few. A list of recently spotted birds is kept on the noticeboard outside the ranger station. As well as birds there are many squirrels, rabbits, hedgehogs and bats. A nature area, called Oak Wood, has an all weather pathway running through it. Oak Wood pond, in the centre of the wood, is crossed by a wooden walkway, this small pond is an attractive feature of the Oak Wood. An excellent example of the St.Helens Rangers’ workmanship the pool is fringed with reed and water iris.

Leg O’ Mutton Dam
This is a separate fishing lake, run By St.Helens Angling Association, situated on the Eccleston side of Taylor Park. All species can be caught on the pole or waggler, roach, tench, and carp the main fishing. It is also used also by the Carp anglers as fish can be caught to 25lb and some bream to 5lb. There is no night fishing allowed, and anglers must leave the water by 11:00pm. There is a car park with a barrier on it, so angling Association members using the car park should obtain a key to the barrier lock so that their cars are not locked in. There are now nature trails around the dam and walkers can walk from the lake car park, along the paths by the dipping pool, a small pond in a nature area reclaimed by the rangers, or by the side of the Leg O Mutton Dam, to the field next to the children's play area.

Field and Hill
On the adjacent side of the lake to the boathouse is a large field on a hill. This field is mainly used by dog owners, to exercise their dogs in Winter, but in the summer is packed with people, some sunbathing, families take their children to play there as one of the play areas is on the field but the field is utilised for all manor of sports including Kite flying competitions held in the summer. From the top of the hill you can see over a large part of St Helens and over toward Billinge Hill. Behind the railings, between the field and nearby Grange Park golf course, there is a small cutting, that used to have a track for coal carts to transport coal, I believe to the iron Mills in Mill Brow, but will need to check the destination out. 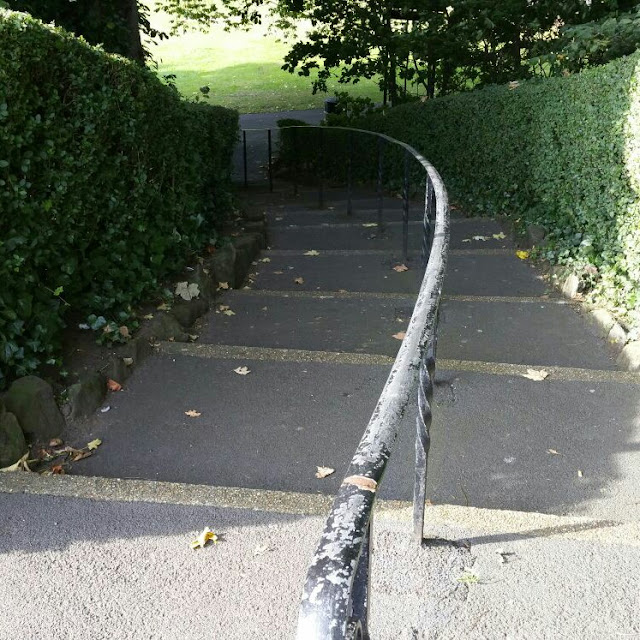 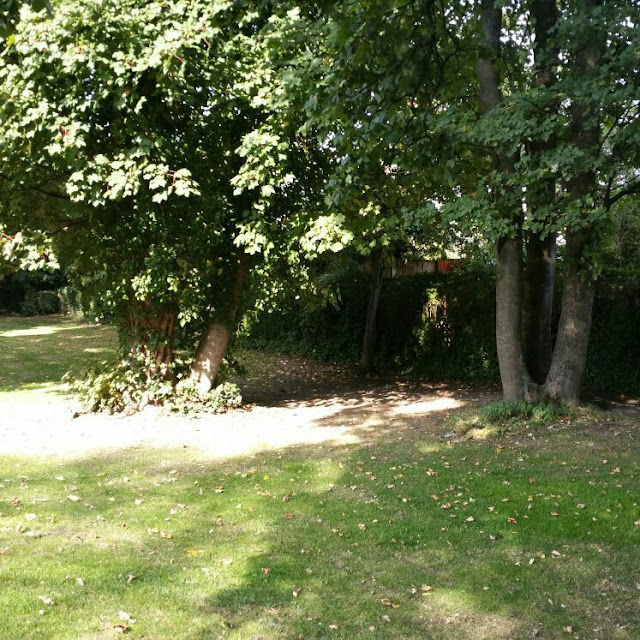 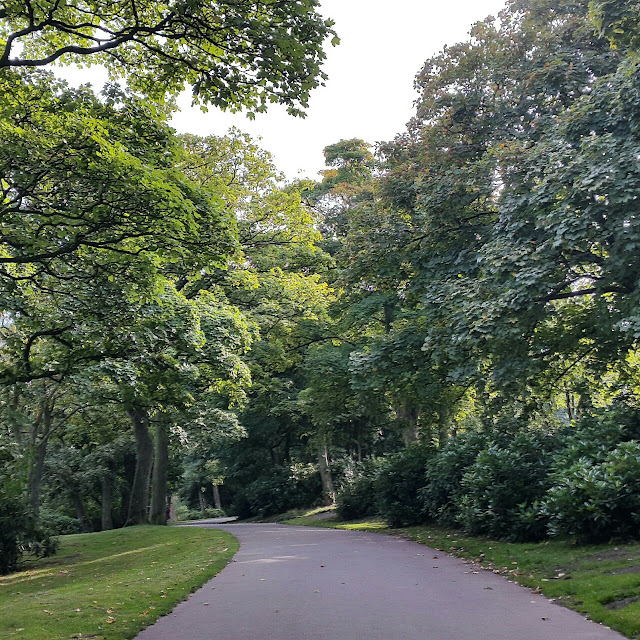 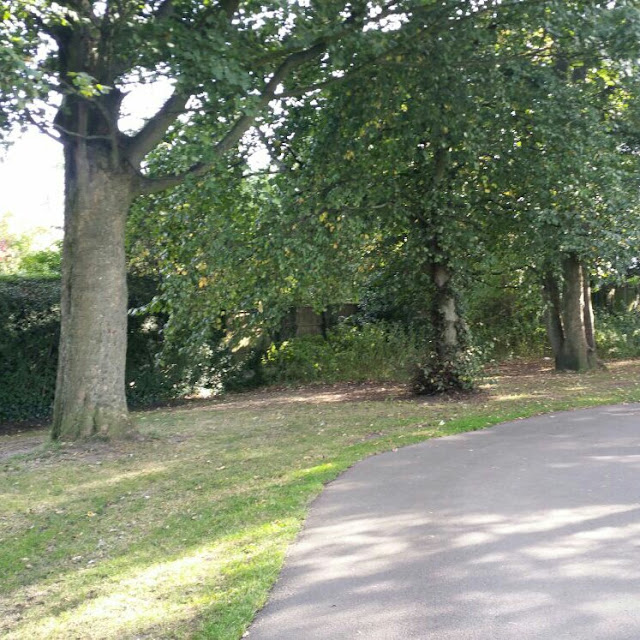 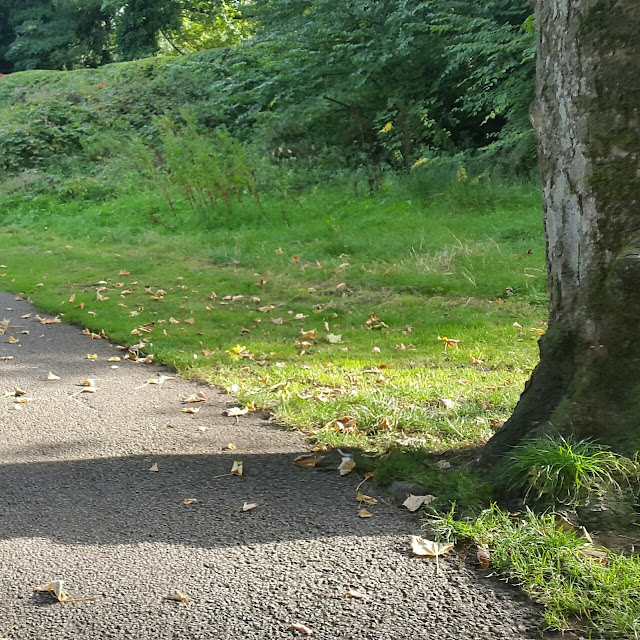 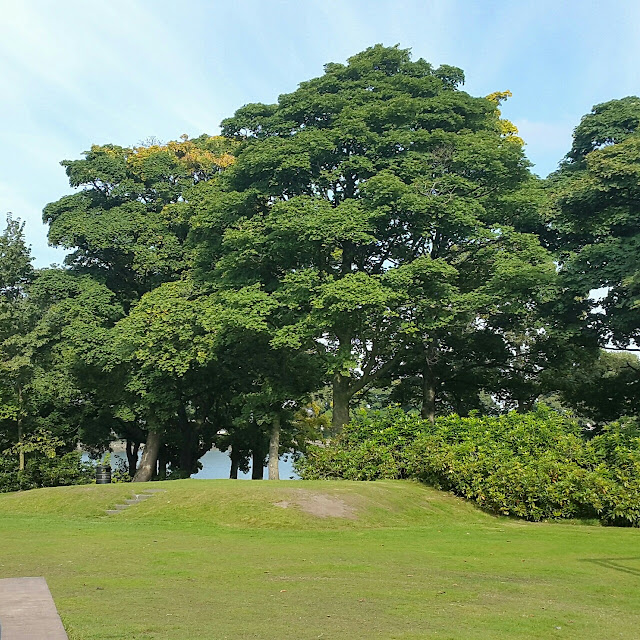 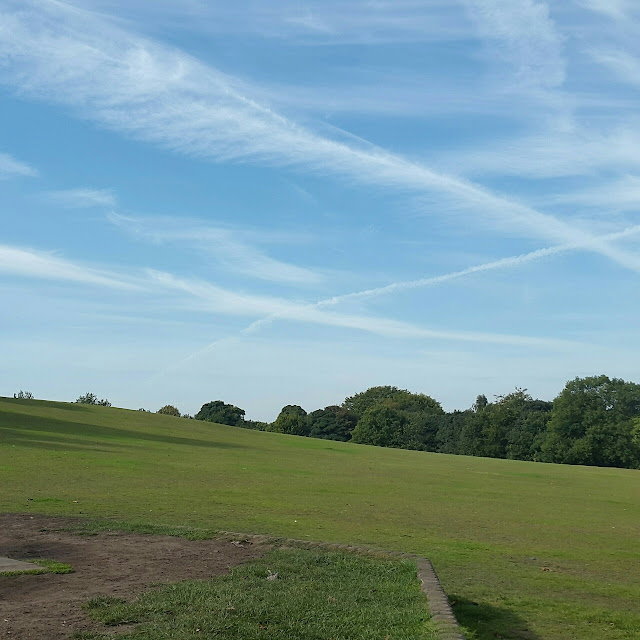 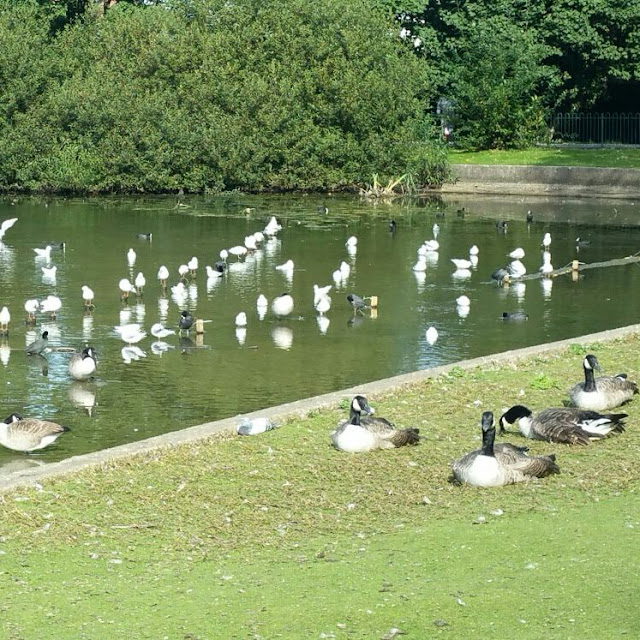 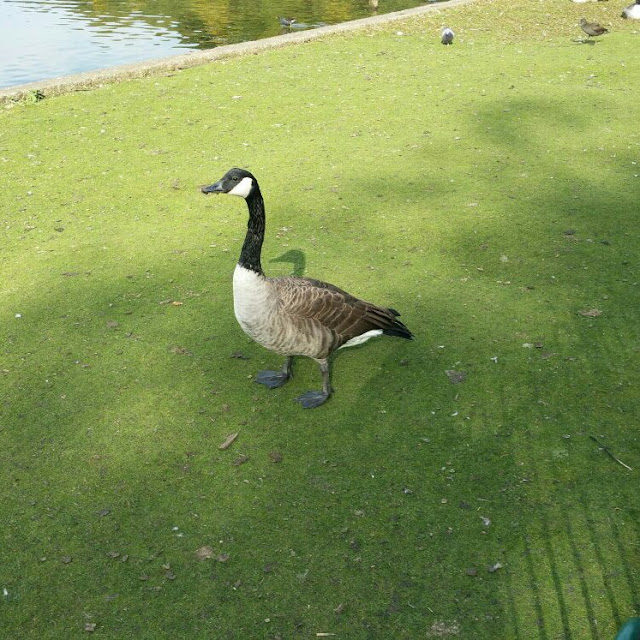 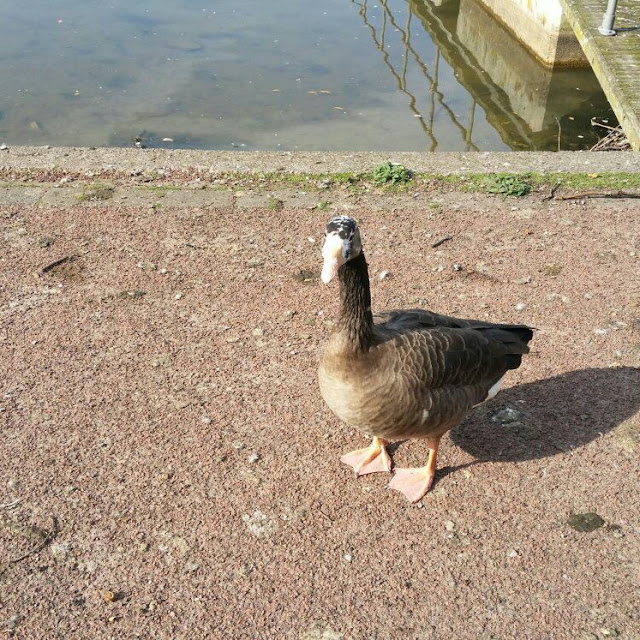 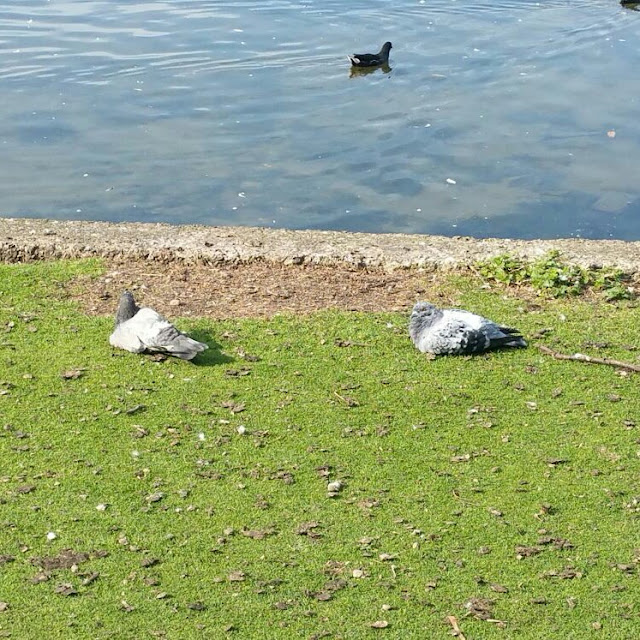 What do you think of this place? Would you/have you ever visited? Let me know by either commenting below or tweeting me. Have a wonderful day!