Hello beautiful's! I know I only did an update a couple of weeks ago, but I'm stuck in bed on bed rest unwell for two weeks and I really wanted to go over a few things which have not been addressed yet and since I've been reflecting on a lot whilst being in bed then here goes. Spring is here and I feel like it’s a new stage in my life now, it's a brand new season in the year and I want to enjoy as much as it as possible. The past few months have been really hard and I feel like I haven’t really known what to do. Spring is here and I am going to a whole re-fresh of life - starting with being honest my blog… 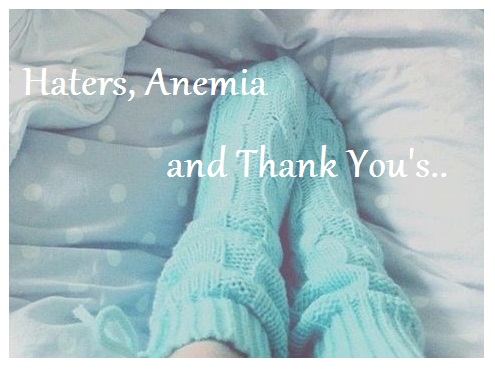 Firstly, I have no idea what happened with my tumblr. If you didn't know already my tumblr page was hacked; I lost all of my followers, everyone I follow, all of my drafts, basically everything. This happened to me last year and it really upset me so for this to happen to me again, I was totally shocked. I contacted tumblr and they were so helpful and changed all of my security with me and everything, and I can’t thank them enough for how helpful I have been. Problem is now that I need to gain all of my followers back, so if you have followed me in the past please do so again. And if you were the hacker reading this; Why? Why hack me? Hackers are horrible, and going through someone’s blog (either it be personal or not) is just bullying and vile. Shame on you. And yo may have noticed my tumblr layout has changed too, although the hackers didn’t change my layout theme I wanted a change that so I have obviously have and I hope everyone likes it.

You also may have seen on my twitter account about me moaning about online-bullying a lot lately. There are a group of girls, who I won't name and shame because to be honest I'm better than that, but they have really been very mean and negative towards me recently saying that I shouldn't be going along to blogging events because I'm in a wheelchair and I need my husband to come along with me to push me around and be there encase anything happens. I personally don't think that it's very fair and it's really been upsetting me lately. I thought the blogging community was supposed to be a family? Not a load of haters being horrible to me because I'm a spoonie.

For people asking what is wrong with me right now, well.. I hate that term. Nothing is "wrong" with me. My RA and my anemia have been under the weather right now which is causing me a lot of pain, but that doesn't mean that there is something "wrong" with me, that just means I'm a little unwell. A couple of people have asked me about my anemia and what it is. Anemia is a condition in which there is a deficiency of red cells or of haemoglobin in the blood, resulting in pallor and weariness. I have Iron deficiency Anaemia which is a condition where a lack of iron in the body leads to a reduction in the number of red blood cells. Iron is used to produce red blood cells, which help store and carry oxygen in the blood. If you have fewer red blood cells than is normal, your organs and tissues won't get as much oxygen as they usually would. There are several different types of anaemia, and each one has a different cause. Iron deficiency anaemia is the most common type. The symptoms of my anemia make me tired and I have lack of energy, make me short of breath, give me head-aches, difficulty swallowing, and a pale complexion. I've been put on tablets for this now for feeling a little under the weather so hopefully I will feel more like myself soon.

I want to say a massive sorry to not only all of my followers and my readers, but all of the companies that have gotten in touch with me to review their products and send me things to review, I promise I will get around to doing them all over the next couple of months - I’ve just had a really horrible few weeks. And a MASSIVE thank you to everyone who has contacted me and wished me well and left me little notes and messages, it really does mean a lot to me. Having people out there that take the time and go out of their way to message me means so much so THANK YOU!