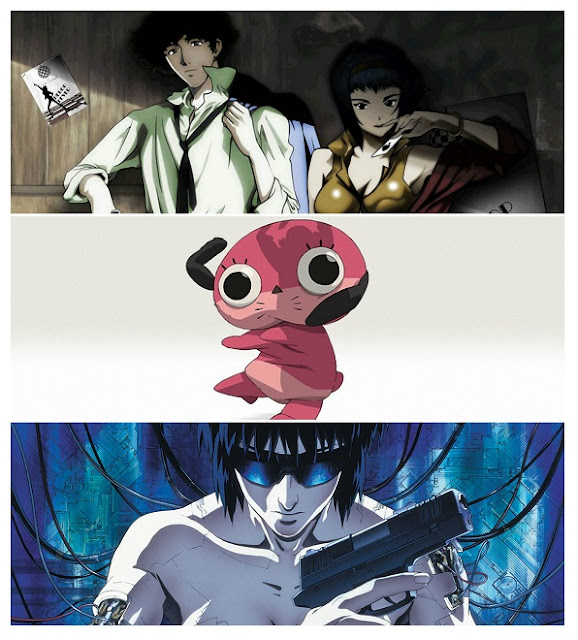 I've been wanting to share another side to me on my blog for ages, and since I'm a bit of a massive geek I thought I would share some of the nerdy side of me today on my blog, with some help from my husband.

"Cowboy Bebop had to be the first anime we talk about, I fell in love with this show from the very first episode. It has some of the coolest characters I have seen in an anime like Spike Speagle and Faye Valentine, and each charactorhas so much deapt to them that the whole story gets you so wrapped up in wanting to know more. If you're wanting to fall in love with a series then I can't recommend this one more highly!" - AlishaValerie

"I love the music of Cowboy Bebop. Just the music alone makes this watchable, the soundtrack is incredible, and it spun multiple soundtracks. This series set in the future and interplanetary, Cowboy Bebop is the story of 3 bounty hunters, a genius hacker and their dog. Stories of past lovers, social interaction and just trying to make a living. 3 2 1… Let’s Jam!" - Morphilms

"Paranoia Agent is something completely different to anything I have ever seen, it's such an amazing psychological thriller that will keep you on the end of your seat wanting to know more as its so intriguing right from the get-go. There is a mixture of episodes from different points of view and you think that you start figuring out the mysteries in the story in your own head, only finding out that the ending is nothing like you could ever imagine. This anime is so well done that I don't think any other thriller anime could ever top it. Five stars!" - AlishaValerie

"This is one brilliant psychological anime series, about urban myths and multiple stories intertwining with each other against the backdrop of an inline skating, baseball wielding child, terrorizing people. The writing is so dark, that anyone who is a fan of Black Mirror, Filth and Memento will be very satisfied. Visually stunning, the director is known to make mind-warping films like Perfect Blue and Paprika." - Morphilms

"Oh wow, where do I even begin with Ghost in The Shell? Even though it's set is 2029 there are so many things in this anime that I related to, like feeling like you're fighting a losing battle sometimes alone. With a mixture of excellent colour graphs, animation and computer graphics that have to be seen to be believed plus its slow motion, fires, sunset and explosions in fantastic effects, it's a simply incredible anime that everyone should watch to fall in love with." - AlishaValerie

"This is the anime that started it for me, on Saturday night, at midnight on the sci-fi channel they would show an anime an this was the first time I saw and I've held it on a pedestal ever since for anime and sci-fi movies or series. Set in future Japan, a cyber-terrorist unit, section 9, fights against the puppet master, a government avoiding hacker. Led by Major Motoko Kusanagi, section 9; hope to expose this global criminal, through surveillance and infiltration both in the physical and electronic world. This is one the best animes out there influencing the matrix and establishing a strong female lead." - Morphilms

Have you seen any of these animes? I'd love to know what your favourites are?