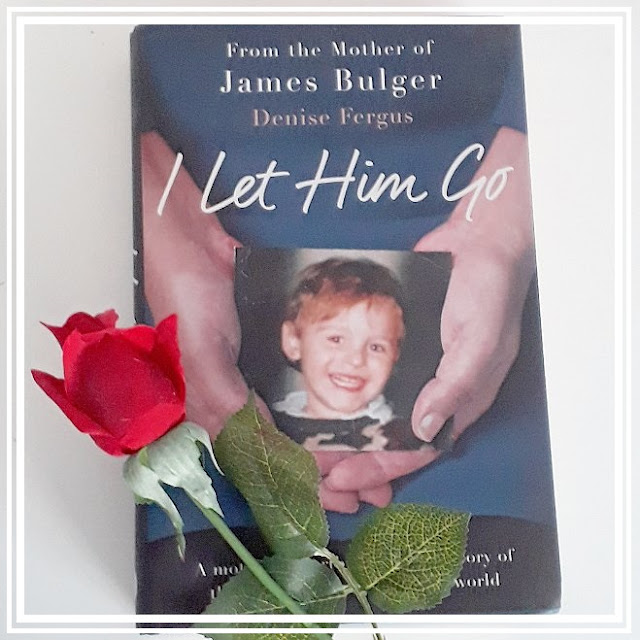 I was recently kindly asked by Amazon Prime* if I'd like to receive a book to review on my blog and when I saw that this book was on the list to choose from, I jumped at the chance. If you don't know already 'I Let Him Go' is a heartbreaking, important story shared and written by Denise Fergus, the mother of James Bulger who was sadly murdered by two ten-year-old boys after being kidnapped in Liverpool twenty-five years ago.

'I was crying so much I couldn't breathe. The thought of leaving the shopping centre without him was crushing. I knew that walking away from the place where he had gone missing, without any idea where he now was, meant that things were really bad. James had been right by my side and then he was gone forever.'

On 12th February 1993, Denise Fergus' life changed forever. As she was running errands at New Strand Shopping Centre in Liverpool, she let go of her two-year-old son's hand for a second to take out her purse in a shop and from that moment on Denise never saw her son again. In this extraordinary and heart-wrenching book comes the unflinching account of that terrible day from James Bulger's mother. What if she had never taken James shopping? What if she had turned right coming out of the butchers, instead of left? Would she have seen her son being led out of the centre by two children? Denise's initial hope of seeing her son on CCTV with other kids, quickly turned to devastation when, two days later, James' body was found. His murder shocked the world, as his killers became the youngest convicted murderers in the UK - Robert Thompson and Jon Venables. Denise then took up a tortuous legal battle for James, and it was her astonishing strength and love for her son that ultimately helped to change the way the law treats victims of crime. This is a mother's tale, of finding a way through the despair to remember the happiness and wonderful memories that James brought his family. Above all, Denise doesn't want her son to be remembered as a murdered child, and with this beautifully written book, she does just that.

'I Let Him Go' is one of the best, most well-written books I have ever read in my life, it was so upsetting and difficult to read in parts, this book really broke my heart in two. I applaud Denise so much for sharing her special memories of her late son and instead of this book is all about James' sad death it is an honest memoir to celebrate a life. It really is the saddest, most emotional, heartbreaking yet brave and important book I have ever read and I can't recommend getting yourself a copy to read enough.

'I Let Him Go' has been written by Denise Fergus, the mother of James Bulger, who was heartbreakingly murdered in February 1993 in a series of events that shocked the world. Denise now lives with her three sons and her second husband, Stuart Fergus. In 2010, Denise launched the James Bulger Memorial Trust, which supports young victims of crime, hatred and bullying. In January 2017, Denise was given the British Citizen Award for her tireless work helping other families through situations similar to her own. Please give The James Bulger Memorial Trust twitter page a follow and support Denise Fergus in her fight to get justice for her son.

Denise Fergus and her family, friends and fans (including myself) want a public inquiry into the James Bulger murder case. Throughout the conduct of the case, there have been a number of issues that have been swept under the carpet and it's high time they were investigated. One mystery surrounding the murder of James Bulger case is why the "experts" insisted that Jon Venables was rehabilitated when anyone who knows about this case clearly knows he isn't rehabilitated at all! The report of the Prison Service into an incident at Red Bank secure unit has not been published. It is time to examine all this. To show your support please, please sign this petition - it only takes one minute and it would really mean a lot to me.