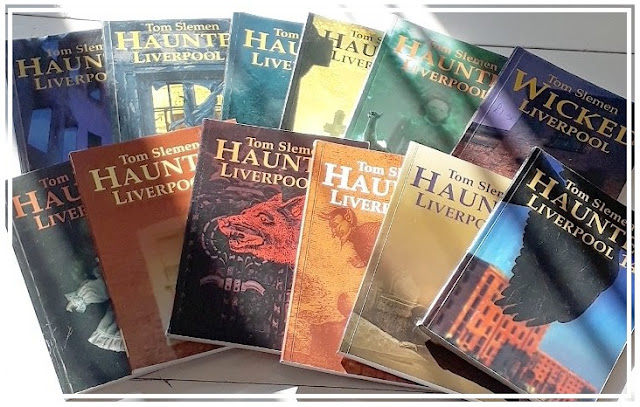 I first became interested in Tom Slemen's work when I was in high school, my class was given a task by our creative writing teacher to pick a book from the library to review. Most of my classmates picked books that were about romance, autobiographies or plays like Romeo and Juliet or Blood Brothers, I wanted something different so after spending over an hour looking for a book to fall in love with I came across a book by an author called Tom Slemen's which was called "Haunted Liverpool". Since reading that very first book over ten years ago I have fallen in love with all of Tom's books and since it's October I thought I would share my reasons why with you all.

Tom Slemen, is a Liverpool writer, columnist and broadcaster, known foremostly as the author of the best-selling Haunted Liverpool series of books which document paranormal incidents and often unsolved or unusual crimes in his hometown of Liverpool, past and present.

Tom's interest in the paranormal began in early childhood, when he lived with his family on Melville Place, near Myrtle Street in Liverpool. He says that he learned from his mother that she had witnessed a ghostly apparition of a Victorian maid carrying a large serving plate along with the eerie sound of children laughing, and he was immediately hooked. None of the family thought to investigate any possible causes for the spectre, but Tom took it upon himself to try to uncover the mystery behind the spirit maid so he went to the local library and discovered that their home was actually built on the same spot where an orphanage once stood - to some this could mean that the ghosts were associated with the former orphanage. Tom later realised that a nearby street was called Orphan Street and from this time forward his interest increased each time he visited the library in search of other ghostly stories.

I first met Tom over ten years ago now when I'd started reading his books. I searched online to find out when his latest book would be coming out and saw that he was holding a live talk not far from where I lived so went along with my mum - we loved it and even got to meet Tom at the end to sign our books for us! Over the years whenever Tom has done live talks my mum and I made sure to go along, our favourite to date was his live talk in Liverpool's St Georges Hall which was all about Jack The Ripper.

There are now over twenty books in Tom Slemen's Haunted Liverpool series and that's not counting his books about Jack The Ripper, Vampires or Murders on Merseyside to name a few. Go grab a cuppa tea and have a read of one of Tom's stories like A High-Class Vampiress, The Coffin, The Clown, or Bloody Mary. If you're wanting a new book to read over this spooky Halloween season I highly recommend checking out the Haunted Liverpool series, you can even read some of Tom's stories on his website by clicking here.


Have you read any of the Haunted Liverpool books? What are your thoughts?