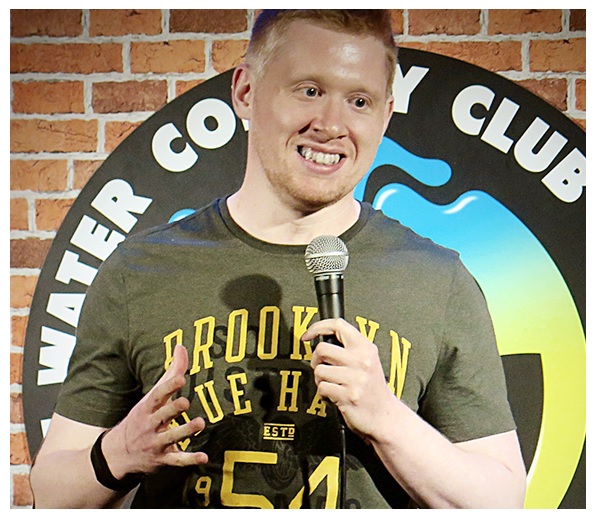 I've always loved stand up comedy; John Bishop, Jason Manford, Lee Evans, Sarah Millican, Miranda Hart and of course the legend that is Peter Kay. So when my friends kept sharing a certain comedian on facebook from Liverpool I couldn't help myself but watch it. So one afternoon I clicked on a video which had been shared by my friend Tracey, the comedian's name was Paul Smith and wow I didn't move for about two hours because I was laughing with tears so much at his performance. Feeling like a bit of a stalker I sat and watched every single video that Paul had uploaded online and within a couple of days ordered his DVD. And wow, what a DVD it is...

Paul Smith is a regular comedian on the stage at The Hot Water Comedy Club in Liverpool. He's been crowned Liverpool's New Comedian of the Year, was a finalist at The Leicester Comedian of the Year competition and has been given the nickname The Ginger King of Comedy. If you have ever been lucky enough to see him live you'll understand that his quick come-backs make him unbelievably popular with the crowd and why he is simply an amazing stand-up comedian. Follow Paul on Social Media: Twitter | Facebook | YouTube

I ordered the DVD and planned a family night in for my dad's birthday last November, and I can hand on heart say I have never seen my family laugh so much - even my Nan thinks he's amazing and she is so hard to please when it comes to comedy! From talking about drunken nights out in Liverpool, explaining how he met a very unique taxi driver once or opening up about the struggles of being a dad to his two young kids, you'll be in fits of giggles and tears of laughter from start to finish of the DVD. I really can't recommend it enough! However, I do advise that you be over sixteen years of age to watch it!

Enjoy over 75 minutes of hilarious stand up from one of the UK's most natural comedy talents as he shares tales of family, fake taxis, fierce attacks and falling over.

Order yourself the Paul Smith Live DVD for only £12.00 by clicking here, and I have to say that its a total bargain in my opinion! If you fancy seeing Paul Smith live then order tickets for his 2018 Hiya Mate tour in the Liverpool Echo Arena then click here.

From watching the short sample videos about, what do you think about the legend that is Paul Smith? Tweet me or leave a comment below, I'd love to know your thoughts!