Why I Unfollowed You 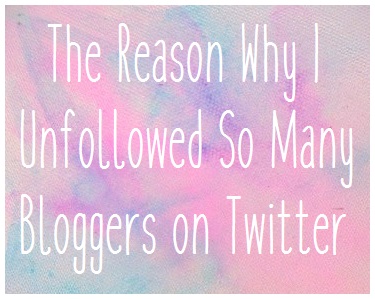 At the start of this year I decided that I was going to go on an unfollowing spree on my social media networks, I unfollowed thousands of bloggers and I wanted to address this issue on my blog and explain why. I've kept following bloggers because I didn't want it to cause drama or upset anyone but I needed a clear out and I want to make it so crystal clear that the reason I unfollowed you does not make you a bad blogger whatsoever, it just means that we have different opinions and views and there is nothing wrong with that - what would it be like if we were all the same? It would be so boring. If I have unfollowed you recently, then it's been because of one of these reasons...


|| You Are a Bubble of Drama || Whenever there is drama happening within the blogging community, you're always one of the first ones to get involved. I'm all for sticking up for innocent people but what you do is bully. You name call and be so horrible towards some people that it breaks my heart for them. I don't want to follow someone who thinks of bullying someone as entertainment, so I had to unfollow.

|| You Are Too Negative || I can totally understand people who suffer from mental health, like myself, and have so many bad days through no fault of their own and post about it on their social media accounts as we all do it. But what I don't like is people who purposely moan and be negative about anything and everything for no reason whatsoever. You tweet things and retweet things which is not good for my own personal mental health as it affects me in so many ways so I had to unfollow.

|| You Never Post Anything || When going through the list of people I was following I noticed that there are accounts that people haven't logged into for years and have probably forgotten their password to by now and won't be logging into anytime soon, so I had to unfollow.

|| You Are Two-Faced || A little while ago I suffered a bit of bullying online from a group of bloggers who I thought were my friends; they used by personal issues against me, they told lies and spread rumours about me to other bloggers and then even went as low as to email brands and PR people I was involved in and working with telling them that I am a bad blogger who only wants free stuff. Blogging is my full-time job, I work damn hard to get my blog up to scratch so you know other blogging friends who I trusted and loved were trying to bring me down really hurt me and crushed me. There were a couple of bloggers who even stayed following me and made out they were my friends and they would talk about me behind my back, it was only when one of them slipped up by sending me a message which was meant for someone else that I found out. So I had to unfollow.

|| You're Not Cruelty-Free || I know everyone is entitled to their own opinion, and that is a great thing, but I can't bring myself to someone who only reviews items and products which have been tested on animals. Knowing how many amazing brands out there are cruelty-free, it breaks my heart whenever I log onto a social media account and see that someone has reviewed something which has caused so much hurt and pain to an innocent animal. I had to unfollow.

|| You Post Animal Abuse || Now don't get me wrong, there are so many amazing food bloggers who I follow who aren't vegan but, and as much as this statement may upset some people as it's going to be very blunt, I don't want to see decomposing animal flesh on my social media. Taking pictures of your prepared food is something we all do and I just skip them on my pages but when you constantly post pictures of your meal before it's been cooked and making fun of the animal, it makes me feel physically sick and so upset. So I had to unfollow.

|| We Have Nothing in Common || As much as you're an awesome blogger, we have nothing in common and we have very different views. I'm a big feminist, I am a huge Jeremy Corbyn and Labour supporter, I'm a Vaxxed supporter, I'm not a Trump supporter. We just don't have anything in common, and that is okay, but I had to unfollow.