Today, May 19th 2019 is World IBD Day. During the global campaign, famous landmarks will be lit in purple in order to raise awareness about the daily challenges of living with IBD. Many countries, cities and people worldwide will join our fight against IBD. Like me when I was diagnosed at fourteen years old, every 30 minutes someone in the UK is diagnosed with Crohn’s Disease or Ulcerative Colitis – the two main forms of Inflammatory Bowel Disease (IBD). 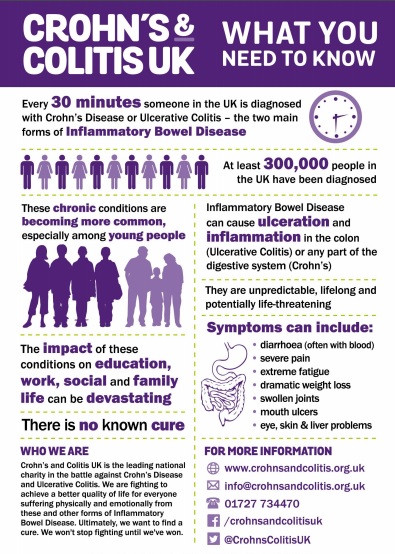 At least 300,000 people in the UK are diagnosed with IBD which are chronic conditions that can cause ulceration and inflammation in the colon (Ulcerative Colitis) or any part of the digestive system (Crohn’s Disease), symptoms can include diarrhoea (often with blood), severe pain, extreme fatigue, and dramatic weight loss. At present, there is no cure for Crohns and Colitis, but drugs and sometimes surgery can give long periods of relief from symptoms - this means one in every two hundred and ten people are living with these unpredictable, life-long and potentially life-threatening conditions - including myself.

Crohns and Colitis UK is a national charity leading the battle against Crohn’s Disease and Ulcerative Colitis. They are fighting to achieve a better quality of life now for the 300,000 people in the UK suffering physically and emotionally due to these and other forms of Inflammatory Bowel Disease. Ultimately, we want to find a cure. For more than 35 years, they have been working with and for patients and their families, the doctors that treat them and the policymakers who can bring about change. Crohns and Colitis UK provide high-quality information and personal care, support life-changing research and campaign vigorously – for more knowledge, better services and more support for people affected by IBD and our 28,000 members. 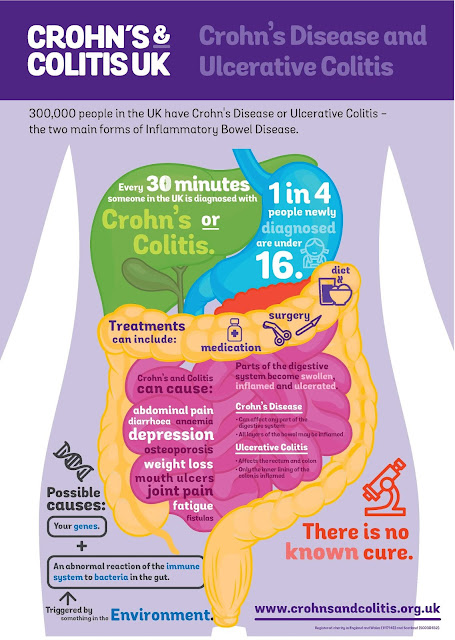 | What is IBD? | IBD, which stands for inflammatory bowel disease (including Crohn’s disease and ulcerative colitis) are two serious, chronic digestive diseases that affect five million people worldwide. There is no cure, no known cause, and little public understanding of the pain and chronic suffering with which IBD patients courageously cope every day of their lives.

| What is World IBD Day? | World IBD Day takes place on May 19 each year to unite people worldwide in the fight against Crohn's disease and ulcerative colitis. Organizations from 38 countries on four continents participate in awareness raising activities to shine a light on the debilitating nature of these chronic incurable digestive diseases.
World IBD Day is led by patient organisations representing over 50 countries on five continents and is coordinated by EFCCA. Many other IBD organisations and IBD activists and other stakeholders have joined our fight against IBD over the years.

| How Many People Have IBD in The World? | About 1.6 million Americans have inflammatory bowel disease (IBD). This figure includes about 780,000 people with Crohn's disease and another 907,000 with ulcerative colitis. Researchers have estimated that 6 to 15 new cases of Crohn's disease are diagnosed per 100,000 people each year.


IBD patient associations, activists and other supporters from around the world will participate on 19 May in the global campaign aimed at raising IBD awareness by highlighting famous landmarks in the colour of purple alongside the organisation of local events. The theme for this year is "Making the invisible visible" which is about showing different aspects of IBD that are not "visible' to the public. There are so many events happening around the world today, check out this link to see what is happening by you.