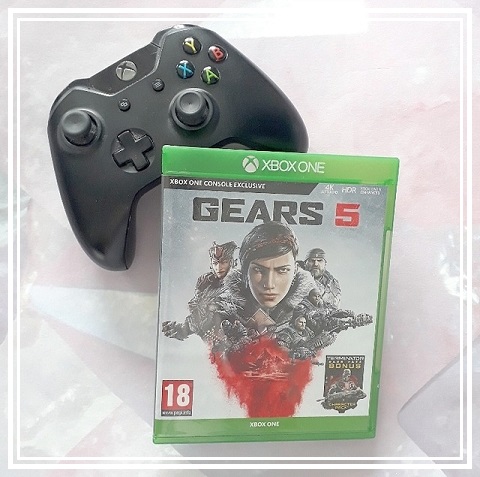 GIFTED | I wasn't around for the Halo-phase of Xbox community, as I didn't get online until about 2005 when Halo 2 was dropping off and Halo 3 didn't come about till 2007. So when Gears of War came to the Xbox 360 in 2006 I was made up to finally be apart of something new and popular on the next-generation console.

The series became an instant phenomenon with its fresh approach and emphasis on having each other back, cover-based shooting and chainsaw duels! The sequel, Gears of War 2, introduced Horde mode were 4 players battled for survival against wave after wave of enemies, then Gears 3, brought 4 person co-op story mode.

Gears takes its place next to Mass Effect, Assassin's Creed and Halo where the franchise has become more than just a game, there's books, movies and other merchandise out there to fatten up your enjoyment and fandom.

Gears 5 begins with a handy and quick tutorial for people like me who have been away from the game and even has a previously in the Gears universe montage to catch you up on the story. Gears 5 follows Lieutenant JD Fenix (son of original protagonist Sergeant Marcus Fenix) and his fellow COG soldiers Del Walker and Kait Diaz as they focus on a new enemy, the Swarm.

When I played local co-op, the screen was split horizontally, my friend could alter his own difficulty separate from mine, if you were playing with a less experienced player or opposite someone who likes a challenge, they could also alter their control sensitivity without affecting mine and in an age of everything online it was good to play with a friend side by side like we used to do before internet and Wifi.

The online parts ran smooth, no lag, with Horde mode filling in AI bots for not full parties. The graphics render a lot quicker than in earlier games and as a whole, the online was really enjoyable after being away for a while with emphasis on team survival rather than just childish insults. The escape mode was a great part were your team has to escape an enemy hive and ammo is limited so you have to scavenge for weapons, this really is a team exercise. The online service offers competitive and cooperative play, a ranking system for more achievement-based players, daily goals to grind out, rewards for continued play and multiple tasks to varying your time online.

The music is beautiful, being composed by Ramin Djawadi who returns from Gears 4 and most people know from Game of Thrones. Sometimes slow but building, it envisions these epic scores washing over this gorgeous landscape as characters walk through the world.

Gears 5 is available now for PC and Xbox one, I would recommend this to anyone who likes a good third-person shooter, to play on their own, with a friend at home or over the internet, it's the summer blockbuster that doesn't make you think too hard and you'll be thoroughly entertained by.


- Written and posted on behalf of Morphilms.

✨ MORE POSTS YOU MAY LOVE ✨
|| Bloggers Twitter Chats (with clickable links to hosts!) || My Mothers Day ||
|| Staying Positive on Bad MH Days || Blog Planning & Organisation Tips || A Day in My Life ||
|| How To Be A Positive Person || How To Be A Morning Person || I'm The Girl... ||
Email ThisBlogThis!Share to TwitterShare to FacebookShare to Pinterest
Newer Post Older Post Home