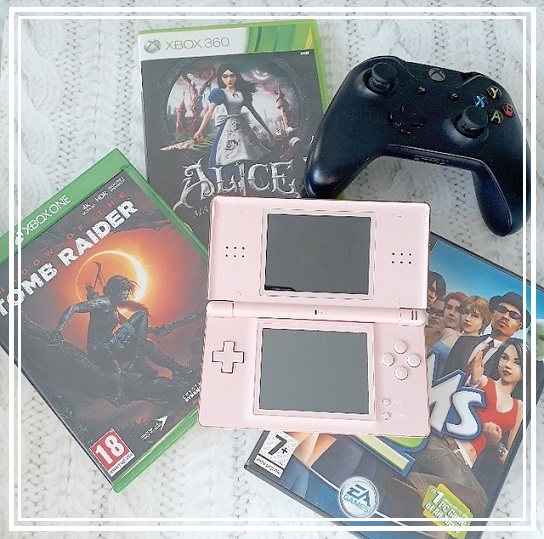 Hello lovelies! There is nothing I like more on an autumn evening than to be snuggled up with my fairy lights on, a lovely smelling candle lit, a hot chocolate in hand and relaxing playing one of my favourite games.

| Life is Strange | Life Is Strange is an episodic graphic adventure video game developed by Dontnod Entertainment and published by Square Enix. These are one of the best games I have ever played and hands down are my favourite games at the moment, actually, these have been for the past two-three years. The first Life Is Strange game is set in the fictional town of Arcadia Bay, Oregon, and is told from the perspective of Maxine "Max" Caulfield (voiced by Hannah Telle), who is a twelfth-grade student attending Blackwell Academy during October 2013. During photography class with her teacher Mark Jefferson (voiced by Derek Phillips), Max experiences a vision of a lighthouse being destroyed by a swelling tornado. Leaving for the restroom to regain her composure, she witnesses classmate Nathan Prescott (voiced by Nik Shriner) kill a woman in a fit of rage. In a single, sudden effort, she develops the ability to rewind time and rescues the girl, revealed to be her childhood friend Chloe Price (voiced by Ashly Burch) the two then pair up and take on many adventures whilst trying to figure out Max's powers. If you're a fan of an adventure video game and you haven't played this yet then you need to get your hands on a copy.

| Alice: Madness Returns | Alice: Madness Returns is a psychological horror action-adventure platform video game developed by Chinese studio Spicy Horse and released by Electronic Arts. Within events of the first game, Alice Liddell, believing herself responsible for a fire that consumed her home and her family, escapes into a twisted version of Wonderland. While held at Rutledge Asylum for treatment, Alice was able to conquer her doubts, and eventually was released from the ward. Madness Returns takes place in 1875, a year after Alice's release. Alice, now 19 years old and resides at an orphanage in Victorian London, under the care of Dr Angus Bumby, a psychiatrist who uses hypnosis to help his child patients forget their memories. Though she believes that she is fine, Alice still suffers from hallucinations of Wonderland. However, during an errand, Alice is struck by a hallucination and believes herself to be in Wonderland again.

| Shadow of The Tomb Raider | Tomb Raider is an action-adventure video game developed by Crystal Dynamics and published by Square Enix. Tomb Raider is the tenth title in the Tomb Raider franchise and operates as a reboot that reconstructs the origins of Lara Croft. In the two months since Rise of the Tomb Raider, Lara Croft (voiced by Camilla Luddington) and her friend Jonah Maiava (voiced by Earl Baylon) have dedicated themselves to stopping the activities of paramilitary organization Trinity. The two track a cell to Cozumel in Mexico that is led by Pedro Dominguez (voiced by Carlos Leal), the head of Trinity's High Council. Slipping inside nearby tombs being excavated by Trinity, Lara discovers a temple containing the Dagger of Ix Chel and references to a hidden city. Murals adorning the walls allude to the Silver Box of Chak Chel and warn of "the Cleansing", a Mayan apocalypse culminating in a permanent solar eclipse. Lara ignores the warnings and takes the Dagger to prevent Trinity from acquiring it. Dominguez catches her and reveals that by taking the Dagger, Lara has triggered the Cleansing. He takes the Dagger, intending to unite it with the Box to stop the Cleansing and use the power it grants him to remake the world in his image. Lara and Jonah escape a tsunami that destroys Cozumel and foreshadows the coming apocalypse. This really is the best game for any Tomb Raider lover to spend their weekend playing at home during the winter months.

| Peggle | Peggle is a casual puzzle video game developed by PopCap Games. Initially this game was released for Microsoft Windows and Mac OS X systems in 2007, but it has since had versions released for Xbox Live Arcade, PlayStation Network, the Nintendo DS (with the help of Q Entertainment), Windows Mobile, iOS, Zeebo and Android; the game has also been ported as a Java application, and an extended minigame incorporated into the massively multiplayer online game World of Warcraft. This is a great game to play if you're bored and want to pass the time whilst still being a little bit productive.

| Sims 2 | The Sims 2 is a strategic life simulation video game developed by Maxis and published by Electronic Arts. It is the sequel to The Sims. The game has the same concept as its predecessor: players control their Sims in various activities and form relationships in a manner similar to real life. Not an Xbox game, but I adore playing The Sims 2. I'm not a big fan of the newer versions of the game as number two always has a special place in my heart.

Are you a bit of a gamer? What's your favourite game to play? I'd love to know your thoughts so please leave me a comment below. Hope you are all having a wonderful day,