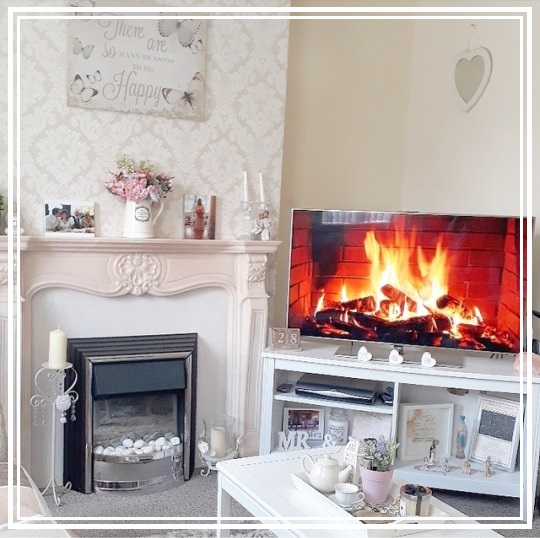 AD | Hello my lovelies! Some of you may remember that back in March I posted an article about "What I Watched" for the whole month, well it was such a hit that I've been asked time and time again by readers to share another post doing the same so that is what I decided to do this month.


| The Haunting of Winchester House | Watched for free on Amazon Prime. The story was terrible, the acting was terrible. I wouldn't recommend watching at all. 0/5

| The Ritual | Watched on Netflix. This movie actually really surprised me and I enjoyed it a lot. I loved the acting of Robert James-Collier (who plays Thomas Barrow in Downton Abbey), such a great underrated talented man. If you like the Blair Witch Project then you'll love this, however, unlike Blair Witch you do actually see the "thing" and it truly is one of a kind! 4/5

| Parnarona - Stacey Dooley meets IS Brides | Watched on BBC One, however, it is on BBC iPlayer to watch too. In this one-off special for Panorama Stacey Dooley travels to Kurdish-controlled northern Syria to holding camps where she meets western women who left their countries to join the so-called Islamic State. For now, the Kurds are containing these women. Some of them are still fervent IS supporters, while others say they just want to come home and face whatever consequences the courts decide. Stacey also finds the camps filled with European children. The Kurds who are in control of this part of Syria are still fighting Russia and Assad’s forces to the south. They say the western powers should not expect the Kurds to be gaolers on their behalf indefinitely. Panorama explores the question of what to do with the IS women and children left behind. I personally haven't changed my opinion on this matter and what is happening, I still have the same views as I did, to begin with. 3/5

| Always Be My Maybe | Watched on Netflix. I am not the biggest fan of comedy movies, in my eyes, it has to be a really, really good movie with great acting and a fab storyline for me to enjoy it without complaining or picking it apart. I can actually count on one hand how many comedy movies I actually like, but this romantic comedy was soo good! 4/5

| Rex * | Watched on Netflix. I know that there has been a lot of talk about this movie having animal abuse during the making, however, I was asked to watch it and then make my own mind up after doing my own research. As far as I can tell myself no animal was hurt or injured when making the movie but I do agree that these animals had long hours when filming but from researching were given breaks regularly and look-a-like dogs swapped out and in for different shifts and days. A Marine corporal fights to be reunited with the bomb-sniffing German Shepard that saved her life in combat when they were both injured by an explosive device in Iraq. I love that this is a true story, the acting is amazing and the ending had me in tears. I would recommend watching this movie. 4/5

| Manifest | Watched on Sky Atlantic. When Montego Air Flight 828 landed safely after a turbulent but routine flight, the crew and passengers were relieved but in the span of those few hours, the world had aged five years and after mourning their loss, their friends, families and colleagues had given up hope and moved on. Now, faced with the impossible, they're all given a second chance at life. However, as their new realities become clear, a deeper mystery unfolds, and some of the returned passengers soon realize they may be meant for something greater than they ever thought possible. If you're going to watch anything from this article, then watch this as I can't recommend it enough!! The acting is amazing, the story-line has you gripped on the edge of your seat and it's like nothing I have ever watched before. 5/5

| Paranoid * | Watched on Netflix. You know them shows that is supposed to have you hooked right from the first thirty seconds? This is one of them shows. A woman is brutally murdered on a children's playground, and a team of detectives find themselves in a dark conspiracy as they search for answers and her killer. However, although the first half of episode one was really good, this didn't keep my attention much and I sort of gave up with it after the first two episodes. 2/5

| I Am A Killer * | Watched on Netflix. Profiling prisoners who have been convicted of capital murder and sentenced to death in America. Recounting their events that led up to their crime, the killers reveal their motivations and how they now view their actions, after time spent on death row. It was crazy to watch and hear how some of the inmates that are on death row, in my opinion, are innocent and should be free men. I can't give too much away about this programme without spoilers but I did really enjoy it and would recommend it. 4/5

| New Blood * | Watched on Netflix. Oh my gosh, this was so good! Two junior investigators come together against a new breed of criminal, the uber-rich and powerful corporations, individuals and governments who hide behind legitimate facades. I was honestly really surprised at how much I enjoyed this! I really felt connected to the characters and the story-line was so gripping. 5/5

| Jade Goody: The Reality Star Who Changed Britain | Watched on Channel 4. Jade Goody was an English reality-television personality who entered the public spotlight in the third series of the then channel 4 programme Big Brother in 2002. She had her ups and downs in the spotlight and was a little bit like marmite, you either loved her or hated her. She gave birth to two beautiful little boys both fathered by Jeff Brazier. She sadly passed away in her sleep on 22nd March 2009 after a battle with cervical cancer. Since Jade's passing, so many women have had smear tests done and saved their own lives, it's like women are not scared to speak up about cancer and how it may affect them anymore, and Jade thankfully started that. I really enjoyed watching this and getting to know Jade more through the eyes and words of those closest to her, she was a wonderfully bubbly woman who will never be forgotten. 5/5!

| Deep Water | Watched on ITV. This is packed with drama, twists and turns that you just cannot wait to find out! Lisa tries to make amends for her part in Lucinda's disappearance but is starting to see a different side to Kate and Guy. Loyal husband Joe tells her to focus on their own family - particularly their daughter Sally, who has taken the events to heart. Roz arranges to meet Scott at an expensive hotel, where they enjoy a luxury meal and then retire to his room. The money he pays her allows her to settle her debts and also treat her daughter, Abby, to some much-needed school shoes.

| Sully | Watched on Netflix. This movie is based on a true story when on January 15th in 2009, Pilot Captin Chesley "Sully" Sullenberger (played by the amazingly talented Tom Hanks) tries to make an emergency landing in New York's Hudson River after US Airways Flight 1549 strikes a flock of geese - landing a plain into water is not something that is ever done as the risk of doing so is not great and basically all of the time fails with loss of life. Miraculously, all of the 155 passengers and crew survive the harrowing ordeal, and Sullenberger becomes a national hero in the eyes of the public and the media. Despite the accolades, the famed pilot now faces an investigation that threatens to destroy his career and reputation. This movie is incredible and if you love movies like The Green Mile, Shawshank Redemption or The Prestige that I would recommend watching this as it really is up there with the greats. 5/5!

| Miss Peregrine's Home For Peculiar Children | Watched on ITV. When his beloved grandfather leaves Jake clues to a mystery that spans different worlds and times, he finds a magical place known as Miss Peregrine's School for Peculiar Children. But the mystery and danger deepen as he gets to know the residents and learns about their special powers - and their terrifying enemies. Ultimately, Jake discovers that only his own special peculiarity can save his new friends. Based on the novel "Miss Peregrine's Home For Peculiar Children," written by Ransom Riggs. Though I think this movie is worth the watch for the story, I was a little bit disappointed by the ending - all I will say is I wanted to know what happened after the Navy! 3/5

| Glow - Season 3 | Watched on Netflix. If you're a wrestling fan and you haven't seen this then you're really missing out! Alison Brie stars as Ruth Wilder, an out-of-work actress living in Los Angeles in the 1980s. Ruth finds an unexpected chance at stardom: the glitter and spandex-laden world of women's wrestling, where she must work alongside twelve totally original and crazy fame-obsessed Hollywood misfits. Marc Maron plays the role of Sam Sylvia, a washed-up director of "B" movies who tries to lead the group of women to wrestling fame. 4/5

| 13 Reasons Why - Season 3 | Season three is set eight months after the end of season two where Clay and his friends are struggling to cope with the cover-up of Tyler’s attempted massacre at the Spring Fling while helping him towards recovery. However, acrimonious tensions reach a boiling point during Liberty High’s Homecoming season, which results in the murder of "someone". The students of Liberty High are once again forced under the microscope as the investigation into this person's death threatens to expose their darkest secrets. I have loved 13 Reasons Why since way before it was made into a Netflix show when I read the book as a teenager in school so was thrilled when it was made into a series as it tackles some important taboo issues. As always I enjoyed this new season and although I don't think it was the best one (personal opinion) I do still love the show and hope for season four. 4/5!

| The Great British Bake Off | Watched on channel 4. It's baaack!! When GBBO comes back on our screens, in my eyes it means that Autumn is pretty much here! I was gutted that Dan went off in the first episode but I'm looking forward to watching more bakes and seeing who wins.

I'd love to know more about what you watched this month, did you watch any of the movies or shows that I did? Let me know by sending me a tweet and telling me your thoughts.

✨ MORE POSTS YOU MAY LOVE ✨
|| Bloggers Twitter Chats (with clickable links to hosts!) || Summer Morning Routine ||
|| DIY Vegan Summer Cocktails || Summer Essentials || Summer Walk ||My Mothers Story ||
|| Staying Positive on Bad MH Days || Blog Planning & Organisation Tips || A Day in My Life ||
|| How To Be A Positive Person || How To Be A Morning Person || I'm The Girl... ||
Email ThisBlogThis!Share to TwitterShare to FacebookShare to Pinterest
Newer Post Older Post Home