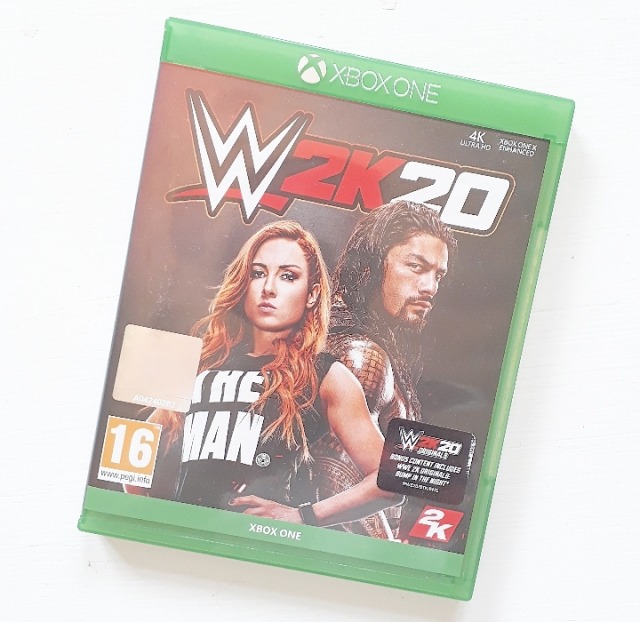 AD | Hello my lovelies! My gorgeous husband brings you another post today with a review of one of the best games that is out right now!

Like many others between the ages of fifteen and twenty is a very poignant time in anyone's life, you end up going through phases, trying new things to find your voice, your personality and so the same can be said for the 2K wrestling series. Starting with 2014s WWE 2K15, where they took there own spin on the series by completely gutting the character creation mode in favour of a storyline based gameplay and new control system, the series has grown since then, improving with every new entry, adding new features and taking strides in terms of drawing in new fans, keeping the old and still looking for fresh approaches.

A lot of criticism with yearly games is that since they're a fresh coat of paint over a system that just updates the roster, you leave little room for improvement or innovation. If it's not GM mode they want back, then just a plain "it's not no mercy from the N64 days", Wrestling game fans are a lot like normal Wrestling fans, in that they like living in the nostalgia when new games are trying for something different to make them stand out, which often means putting yourself out there to take a lot of criticism, negativity and frustration from fans.

This year they've put an emphasis on the women's revolution that started out in their development brand of nxt, then to the hashtag #givedivasachance, to being seen as superstars (like the men), how the wave of momentum grew to main event Wrestlemania, being ushered by the collective four horsewomen. You will play as the boss Sasha Banks, the hugger Bayley and the man Becky Lynch, as well as other iconic women in this true story of empowerment, discovery and shattering glass ceilings.

The male player story now allows a Male and female character to start from their rookie days in their local indies to making it big in the WWE with everything in between. Also making a return from last year is the 2K towers, a mortal kombat inspired set of gauntlet matches with various stipulations that will challenge new and veteran players alike. These towers are themed, with a Roman Reigns centred story from some of his epic encounters, against the likes of Team Hell No to his incredible battles with the Beast, Brock Lesnar. Their's also the women's tower were various women from throughout the last 20 years have made an impact, are showcased with their own towers including Asuka, Ember Moon, Lita & Trish, as well as a 2K tower, that offers fresh and exciting new scenarios, with odd couple tag teams and crazy match stipulations.

The online portion is fun, with little lag, though I think 2k has taken away the ranking system, for people who want to experience the game competitively against other humans, this is a great way. If there aren't enough players for a more than one on the one you can fill the team with bots.

After 5 years of teaching gamers a Wrestling control system, 2k have changed it once again in favour of a more streamlined approach, which gets some getting used to for older players like myself, however, I have confidence it will become second nature through repetition.

The roster boasts over 200 wrestlers, current and legends, various unlockable characters, arenas, as well as the graphics being presented in glorious HD and even an option for 4K.

WWE 2K20 for all its stride forwards has steps back, the 2K originals are a great addition adding new features, different storytelling techniques and bold choices, especially with the upcoming DLC were it's a very what if... style of presentation. However changing the controls 5 games in, parts of the face mapping seeming worse, the detract of the create a championship and taking out certain current-day wrestlers really makes you question why original developers, Yukes didn't help instead of leaving it to Visual Concepts who have struggled to handle the reigns of this franchise. It's an enjoyable game but I think WWE 2K19 was its magnum opus.

WWE 2K20 is out now for Xbox One, Windows and Playstation 4.

- Written and posted on behalf of Morphilms.