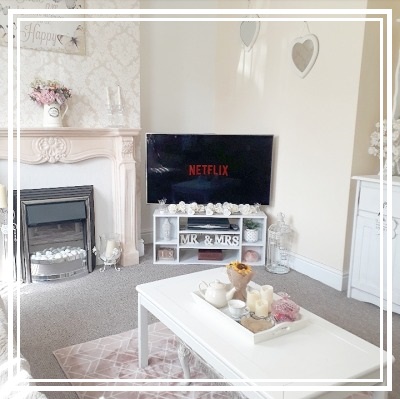 AD | Hello my lovelies, happy Saturday! I wanted to start with Saturday afternoon's are the most perfect day to relax on the sofa with loads of munchies and have some self-care time but let's face it that's any day right now due to this horrible coronavirus lockdown, right? So I've put together a little list of my top five shows that you should be binge-watching right now on Netflix*.

| Orphan Black | This is a brilliant thrilling Canadian drama series starring Tatiana Maslany as Sarah Manning (among others), Jordan Gavaris as Feliz Dawkins and Maria Doyle Kennedy as Siobhan Sadler or Mrs S as she's mostly called. After witnessing the suicide of a girl who looks just like her, Sarah assumes her identity. But she soon discovers a compelling conspiracy that changes her life forever. If you want something that gonna keep you on the edge of your seat then this is for you!

| Call The Midwife | Adapted by Heidi Thomas from the best-selling memoirs of Jennifer Worth, this drama series is a moving, funny, colourful look at midwifery and family in 1950s East End London. It follows newly qualified midwife Jenny (played by the talented Jessica Raine), who joins an eccentric, lovable community of nuns who are nurses at Nonnatus House. Jenny is surprised to find herself at a convent as she thought she was being sent to a small private hospital and is initially daunted by her surroundings, most notably the formidable Sister Evangelina (played by Pam Ferris) and the unconventional Sister Monica Joan (played by Judt Parfitt). But Jenny gradually begins to find her way and develops incredible friendships among the nurses, as they are drawn into the lives and homes of the women and families they treat. I used to adore watching this show with my late Nan every Sunday on BBC One and was so happy that it came onto Netflix.

| The Big Bang Theory | The lives of four socially awkward friends, Leonard (Johnny Galecki), Sheldon (Jim Parsons), Howard (Simon Helberg) and Raj (Kunal Nayyar), take a wild turn when they meet the beautiful and free-spirited Penny (Kaley Cuoco). This is my go-to show whatever mood I'm in, I love it and really highly recommend watching it to everyone. If you're a fan of comedy then you will love this, it's sort of along the lines (a tiny little bit) like the sitcom Friends.

| Prison Break | This is an American television serial drama created by Paul Scheuring. Michael Scofield (Wentworth Miller) is a desperate man in a desperate situation. His brother, Lincoln Burrows (Dominic Purcell), was convicted of a crime he didn't commit and put on Death Row. Michael holds up a bank to get himself incarcerated alongside his brother in Fox River State Penitentiary, then sets in motion a series of elaborate plans to break Lincoln out and prove his innocence. Once out of jail, their perils aren't over and the brothers (and some other inmate friends) must flee to escape recapture and battle an intricate political conspiracy that puts everyone's life at risk, including the prisons nurse who has fallen in love with one of the brothers!

| The Crown | This show is based on an award-winning play "The Audience" by showrunner Peter Morgan, this lavish, Netflix-original drama chronicles the life of Queen Elizabeth II (played by Claire Foy) from the 1940s to modern times. The series begins with an inside look at the early reign of the Queen, who ascended the throne at age 25 after the death of her father, King George VI. As the decades' pass, personal intrigues, romances, and political rivalries are revealed that played a big role in events that shaped the later years of the 20th century. I have to admit that when starting this I wasn't much a fan of our Queen or the Royals after the way they treated Princess Diana, but this drama is so good and really changed my view of every one of them!


Let me know on one of my social media pages of what shows that you have been loving lately and what your thoughts are of my favourite ones that I mentioned above. Sending you all so much love for a wonderful day x